We're making changes on Miramar Avenue between Shelly Bay Road and Tauhinu Road to make this busy stretch of road safer and easier for everyone.

Construction of new walking and biking paths and crossings is expected to start in late March 2021. There will also be some changes to bus stops and traffic lanes. Councillors approved this section of the Miramar Town Centre project on 23 November 2017. 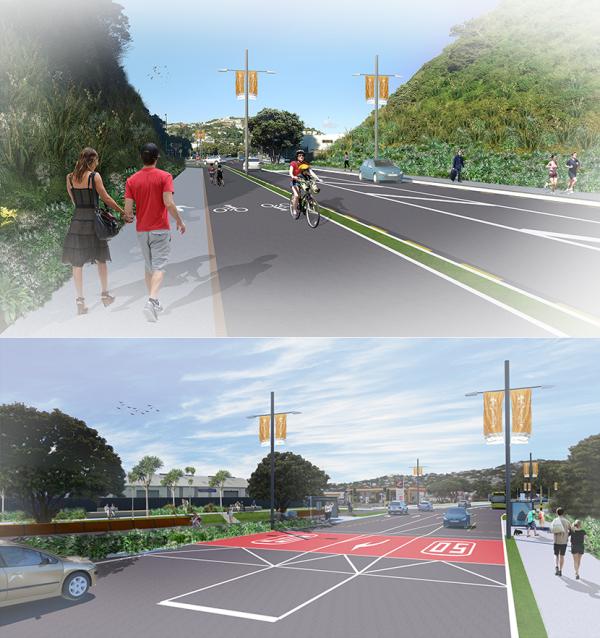 A two-way bike path at kerb height separates people on bikes from the traffic, and encourages less-confident riders to use the path.

The two-way bike path through Miramar cutting will connect Miramar with the Cobham Drive and Evans Bay bike paths now under construction, and the safer new bike routes in Kilbirnie and to Newtown. It would also link to other proposed routes in Miramar and future phase 2 options for Miramar Avenue in the town centre.

Enterprise Miramar Peninsula Inc (the Miramar BID), a group of local business people, members of the community, Wellington City Council transport planners, and others worked together in late 2016 and 2017 to look at the best ways to redevelop this section of Miramar Avenue, as well as the area between Tauhinu Road and Park Road. This involved balancing competing demands to make getting about and passing through this very busy area safer for everyone, including people on foot and bikes.

It was part of a wider in-depth look at the east.

Two possible options for Miramar Avenue between Tauhinu Road and Park Road were developed as well as a proposal for the connection through into Miramar. This followed a series of three workshops hosted by Enterprise Miramar and facilitated by the Council from November 2016 to January 2017.

The first workshop examined the transport issues and what the solutions might look like. The second and third workshops developed a long list of options for transport improvements and then narrowed these to a short list for presentation at public drop-in sessions.

Two public drop-in sessions were held at the ASB Sports Centre in March 2017. These were an opportunity to learn more about and help plan (provide input/feedback) on proposed bike and walking improvements on Cobham Drive, Evans Bay to Oriental Bay, Kilbirnie connections, Miramar connections and Miramar town centre.

After this, Enterprise Miramar Peninsula hosted three more workshops facilitated by the Council.

There was then an opportunity in September 2017 to provide feedback on short-listed options for a number of streets in the east including Evans Bay Parade (Greta Point to Carlton Gore Road) and streets in Kilbirnie and Miramar. This included Miramar town centre section 2.

A formal traffic resolution for the section of Miramar Avenue between Shelly Bay Road and Tauhinu Street (section 1) was run in tandem with this – with consultation beginning Monday 4 September and closing Monday 2 October 2017.

Two more drop-in sessions were held at the ASB Sports Centre during the consultation period.

The Council analysed feedback to help determine the proposed designs for the various streets, including the coastal route around Evans Bay. It also decided which projects to progress first.

Decisions were influenced by what people told us, the funding available, more detailed information about likely costs for the different projects, and a desire to start with busy sections that would make the biggest contribution to the planned network.

Changes were made to the proposal for Miramar Avenue (section 1) as a result of the feedback received.

Only section 1 was put forward for Council approval in November 2017. This was in part because it had been agreed with the Enterprise Miramar that the development of Miramar Avenue should be staged. Also, funding for section 2 was likely to be some years away.  Section 2 was put on hold, and no further work has been done on that to date. There will be more community consultation before anything there is progressed.

We have received feedback from the community about this project. Click here to view the summary graphs.

You can read a report on the feedback here.

Changes were made to the proposal following public feedback. The most significant was the decision to not replace the Miramar Avenue/Tauhinu Road and Portsmouth Road roundabout with traffic signals as proposed, but to potentially reconsider them if and when section 2 is progressed.

As a result of feedback from the Heavy Haulage Association and some Maupuia residents, the Council also removed the traffic islands/planter beds that had been proposed for Miramar Avenue near the turn from Maupuia Road. It instead agreed to retain a central painted median to accommodate right turns out of Maupuia Road and for right turns into Shelly Bay Road.

Some changes around driveways have been made during the development of the detailed designs/construction plans following discussions with the adjacent property owners/business owners.